﻿The REdevelopment of Gateway Park﻿

The major elements of the Zoar Valley Gateway will include the following: 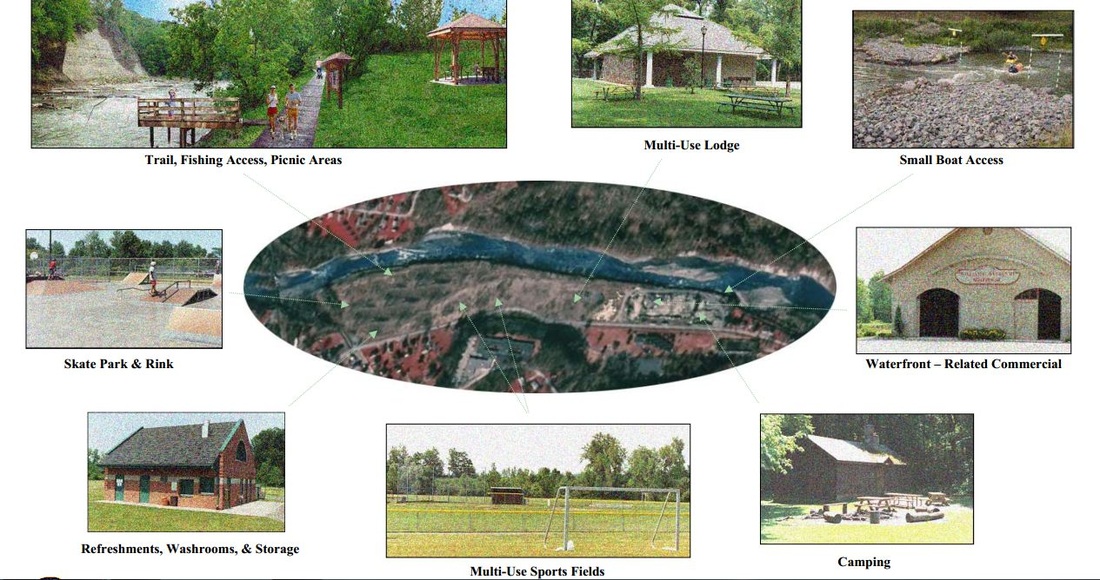 The former glue factory on Palmer Street is receiving new life but is taking some time due to the acquisition of funding. GARC is attending various municipal meetings in Cattaraugus County, including Gowanda, Persia, Collins and the Cattaraugus County Legislature, providing updates on the project. Mike Hutchinson and Robert Gaylord, both of GARC, discussed the 30-acre parcel home to the former Eastern Tanners and the Peter Cooper glue factories from 1904 to 1976.

Currently the site is listed as a superfund site by the Environmental Protection Agency. A five-year review will be held at the end of the year. If everything is clear, the site will be delisted as a superfund site next year. Work will continue this summer on the site. Hutchinson said the site will be graded and dirt will be spread to a depth of 1 foot. The dirt is being purchased from Dan Gernatt and Gernatt Gravel. Gernatt Gravel needed a spot to store material and was given permission by GARC to store it at the Palmer Street site. Gernatt has agreed to sell the material to GARC for $207,000 less than market value. Hutchinson also hopes to have a fence that will line Cattaraugus Creek by the fall.

Plans for the site include overlooks for Cattaraugus Creek, a winter sledding park, a space for outdoor concerts, creek access, walking trails, disc golf and more. The plans will stay consistent with the master plan for the village and the towns.

"The ultimate goal is to have a path along the entire creek but that will take some time," Hutchinson said.

He also said the factory was the world's largest glue factory which used animal waste to produce a product. The company was sold to a French company, Rousselot Gelatin Corp. in 1976 which produced synthetic adhesives until production stopped in 1985.

GARC gained ownership of the property in 2009 and was leased to the village of Gowanda in perpetuity in December of that year. Since then, GARC has worked to clean up the site with work from the potential responsible parties. The PRPs are anyone who had a part in causing pollution throughout the life of the factory or anyone who has ever owned any piece of the property. The village was able to receive $2.65 million in remediation from the PRPs.

"We told the (PRPs) that we would want to put a nursery school there someday," Hutchinson said.

The PRPs had to clean up the site according to what the future intended use of the site would be. By telling the PRPs a nursery school would be a future use, the site was remediated to the second highest level, according to Hutchinson. GARC plans to have a passive active space in the future.

"We wanted to combine multi-use with quiet space," Hutchinson said.

In order to make progress, the project needs funding. Hutchinson said GARC has applied for several grants and received some funding. The site received $170,600 in an operational and management trust account to be used as needed. Any money left over from this trust account will go to Gowanda, and the village has received $22,000 for operational and management costs thus far. GARC also received $70,000 for administration costs for work over the years at the site for Hutchinson's work and others and $234,000 for site improvement given by the PRPs.

GARC also received an EPA superfund redevelopment grant of $100,000 with no local match and an environmental protection fund grant for design for $76,500 with a local share of $19,125. For the local share, Hutchinson and Gaylord can use time presenting or time worked on the project instead of monetary funds. The local share funds for grants will come out of GARC money given by the PRPs so the village is not using budgeted funds.

"The village of Gowanda has never spent any money on this project," Hutchinson said.

GARC will be applying for a parks grant in August for $500,000 and is looking for support from the municipalities. The towns of Collins and Persia already passed resolutions during town board meetings pledging their support of the grant application. If the funding comes through, park construction will start in 2014. In 2015, GARC plans to obtain funding for creekside facilities and construct the overlooks when the funding is obtained.